The Adventures of the Fearsome Pirate Frank: The Musical

Who knew the pirate craze dated back to Shakespearean time?! Apparently, the star of a popular pirate play — The Fearsome Pirate Frank. Frank is the teenage heartthrob of every girl in Shakespearean England, even though he can’t remember his lines for the life of him!  However, when Frank and his supporting cast, including prima donna Esmerelda, get kidnapped by real pirates during one of their productions, it’s good-bye stardom, hello servitude on a real pirate ship! 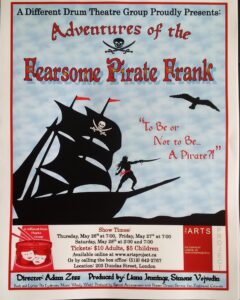