Much Ado About Nothing »

When Canadians were called to fight in The Great War in 1914, droves of Londoners rose to the challenge. But some of the men who chose not to enlist were publicly shamed by young women who pinned white feathers on them to show their disapproval. Chicken Feather follows the relationship of a young man who gets pinned and the young woman who pins him. 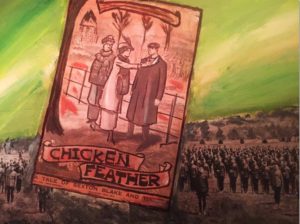