Someone Who’ll Watch Over Me » 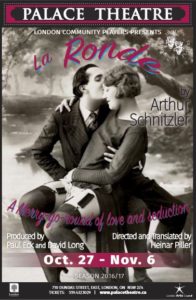 Love is an emotion often rife with impulse, pretensions and deceptions depending who is both expressing it and reacting to it. This play is a passably entertaining linked anthology of characters in various romantic situations even when the material struggles to make an emotional connection.

In 1914 London, Ontario, romance is in the air for all sorts of people. To illustrate that, there is a series of episodes where romantic assignations occur throughout the city with the newcomer of the previous story meeting someone in their own encounter. In each, there are plenty of the same elements including flowers, sweets, and promises they don’t intend to keep even as they manoeuvre through the different emotional minefields.

As someone whom the dedicated self-contained romance story leaves cold, this series of romantic tales feels rather impersonal for its subject matter. Each sketch is only a few minutes long with barely any time allow for you to understand the characters and their motivations beyond the broad strokes and cliches. When you compare that to a full novel, or a television series’ luxury to establish a deep empathy for the characters, this play comes up wanting in that regard.

In its favour is a mildly titillating sense of humour and verbal wit. For instance, the characters manoeuvre through their trysts as they try for home runs with their acquaintances not always understanding the game. As a result, the cliches and truncated character development has some narrative justification, but usually not enough for you to actually care about them.

That said, the players make the most of the material. For instance, Charlotte Weeks is fun as the Young Wife, a sophisticate consumed with social facades and the fear of exposure. Thomas Fox plays against her well as the Husband with an arrogantly oblivious hypocrisy that presumes to lecture on prostitutes’ social worth when it’s obvious he’s a regular customer. Aimee Adler shines yet again as the Actress, with a grand dame presence overpowering everyone, be they a pretentious poet character like Philip Krust or a slippery Industrialist character by Michael Wilmot.

However, where the play really shines is in the stagecraft. For instance, the centre section of the stage revolves which enables instant scene changes with each turn the next scene prepared as the current one plays. Furthermore, I like how two people set up a privacy screen for the sexual interludes to project comical visual euphemisms for the action it is concealing. The fact that the stagehands operating it have their own mischief to make is a bonus to make the scenes all the more entertaining. Combine that with well chosen lighting and music, and you have a play where the interludes are more entertaining than the main action itself.

This play defied some sensibilities for its time, but its abbreviated character play undercuts the dramatic effectiveness even as its humour partially redeems.