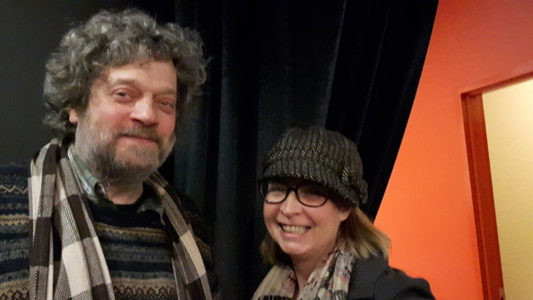 When the lights go down on a theatre stage, an audience knows they are going to be transported into a world for a few hours.

This weekend, however, those sitting in the McManus Theatre will be transported into 8 different worlds each night.

Eight stories per evening, eight different playwrights, two directors and a handful of actors will transfix audiences ten minutes at a time.

The annual PlayWrights Cabaret was the brainchild of former Grand Artistic Director Susan Ferley and has proven to be a gateway for fledgling playwrights into the world of theatre.

This year for example, London’s Carolyn Nesbitt-Larking makes her playwriting bow with Johannah, a play about the last ten minutes of Johannah (“Black”) Donnelly’s life.

Set in the burning farmhouse where she met her doom, Nesbitt-Larking says it’s about Johanna Donnelly confronting those people who put her down and saying her piece to them.

“Most of the stories about the Donnellys focus on the males and some of the research and readings made her look bad,” she explains. “This is about her and who she was as a woman.”

Nesbitt-Larking was surprised that she was chosen because, she notes, “There are so many good playwrights in this city.”

“I felt very confident about Johanna but it is a blind submission so I was glad to know that the jurors thought there was something there for them to work with.”

One of those jurors was Jeff Culbert, who will be directing about half of the 16 plays. His directing partner is Megan Watson. Culbert likes the PlayWrights Cabaret because of the opportunity it provides new playwrights.

“It’s pretty easy for someone to give it a go,” he says. “We have people who have never written something before to even someone like James Reaney Sr. in our first year doing this.

“Mike Wilmot started here and now his plays are produced all over North America and recently, even Russia.”

As Nesbitt-Larking noted, all submissions are read and evaluated without the jurors knowing who penned them, which makes certain the scripts are judged on merit and not the author.

“Over the 16 years we’ve been doing this, we’ve presented about 100 different playwrights from London and the area,” adds Culbert. “We get up to 60 scripts a year.”

“It kind of reminds me of an animation festival. When the lights go down you really don’t know what world you’re going to be in or what’s coming around the corner.”

The preparation for the festival is a lot of work for everyone, but few more than the actors tasked with bringing the playwright’s words to life.

Martha Zimmerman is one of them, having roles in a dozen of the 16 plays. Her focus is on bringing the words of the playwrights to life for them to see.

“It’s great for the writers so they can see their work and see how it will work onstage,” she explains. “It’s a staged reading, with scripts in hand, but we try to bring it to life as much as we can.”

“You’re definitely shifting gears and transitioning not only from one scene to the next but also one world to another.”

Joining Zimmerman on stage for the plays will be Rachel Jones, Tyler Parr and Jim Doucette.