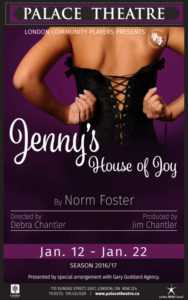 Prostitution may be the world’s oldest profession, but it’s also one with its own ideas of propriety, ambition and politics. This play is an enjoyable exploration of that kind of life, a comic tale with a refreshingly non-judgmental tone laced with a genuine humanity.

In the Old West, Jenny (Colleen McGeough) runs a successful brothel with the naively socially ambitious Anita (Bronwyn Wilson) and the hard bitten Frances (Charlene McNabb) as her employees. Suddenly, the refined and desperate Natalie (Kaitlyn Rietdyk) comes pleading for a job and proves, after some adjustment, to be surprisingly talented at the profession. However, Frances suspects there will be trouble ahead with this addition, and it does come, both from within and without.

Considering that the stereotypical view of a brothel story is one rife with cynicism and tragedy, this story is a welcome change of pace. Here, it is a place stocked with real people going about their professions, albeit one with its own unique health and safety concerns. With that sense of normality in place, the character interaction gives this show a fun workplace comedy that feels strikingly familiar for anyone maintaining a business.

That ambience takes on a different significance as the story takes a powerfully dramatic turn as ambitions are both shot down and inflated in the second half. With that mix creates a memorable conflict as different ideas of honour and gratitude collide like freight trains, until the consequences of another conflict barge in with shocking clarity. When that happens, the story takes a powerful tone as everyone gets shocked into new perspectives no one anticipated. When that happens, it creates an surprisingly uplifting ending that feels completely logical and humane for all involved.

The players help make that story possible with a welcome comfortableness with its subject matter. For instance, Colleen McGeough is a special rock of drama stability as the title character as she reaches out with a mix of compassion and pragmatism in a life she grown reasonably comfortable with. When her main act of both seems to be answered with betrayal, you can understand how her outrage combines with her fears to lash out with some justification.

McNabb performs a fine dramatic counterpoint as Frances, an older veteran with a ruined former life from drink and an irascible attitude now making it worse. However, her character still has a believably keen eye and the well-hidden compassion to guide it. That comes out in a beautiful moment of courage that reveals how much of the best of her was in reserve after all.

In contrast, Wilson is a delight as Anita, a naive hayseed who desperately wants to be more than her work can allow. Wilson is able to perfectly convey a infectious sincerity and lightheartedly sweet nature that is tempered with sufficient dramatic weight to keep it from being cloying. As such, a fun character is created to lift or lower the mood of the play with masterful skill.

Rietdyk plays off those characters magnificently as Natalie, a woman of education and breeding who is suddenly thrust into an alien world by the direst of necessities. Seeing her character adjust to her new life and then excel would have been so easy to play to caricatured extremes, but Rietdyk refuses that crutch. Instead, she plays her role with a perfectly balanced mix of hardening experience, a well-considered business acumen no one anticipates, and a misplaced sense of honour that confuses superficial politeness with a true consideration of others.

Finally, Margot Stothers is powerful as an desolate wife trying to get some control over a situation anyone would find as horrible as it is humiliating. So, when she makes the plunge to bargain with the women she despises with hopeless self-righteousness, you can spare some pity for her, even if her later choices are so unacceptable. When the weight of her choices finally hits her against a nobility she never expected, Stothers is able to create the logical reaction perfectly as a woman realizing all her prejudices have collapsed along with her self-worth around her.

Finally, the stagecraft is exquisite as always with the stage beautifully setup with all the furnishing of a proper high class brothel. Complimenting that is gorgeous costuming that feels right in period for the story’s time and characters. Finally, the special effects are artfully limited to one shocking usage with well timed economy for the best impact.

Sexuality as a commodity is a concept rarely treated as a positive in our culture. However, this play is a powerful look at women who make that choice in a way that is not only amusing, but memorably enlightening in the bargain.