“Something is rotten in the state of Denmark”

Most young people look forward to a visit home after being away at university, but what if you are a young Danish prince who comes home to find his royal father unexpectedly dead, and his newly enthroned uncle now married to his far too recently widowed mother?

The opening of Shakespeare’s Hamlet places the young prince in an untenable situation, so it is no wonder that in his first soliloquy he ponders the meaninglessness of life and even the possibility of suicide. The appearance of his late father’s ghost, however, reveals that the King’s death was no accident: Hamlet’s Uncle Claudius murdered his own brother, seduced his wife and took his throne – the throne that should have gone to young Hamlet.

But this is no simple revenge tale. The power of Hamlet comes from its intimacy. The audience spends more time inside Hamlet’s mind than any other character in Shakespeare. We follow Hamlet’s introspective discourse as he wrestles with questions of morality and existential purpose, all while navigating a labyrinth where few people are who they seem to be; where everyone’s motives are suspect; where the line between madness and sanity is blurred; and where each new movement of plot only highlights the depths of festering corruption in the kingdom. Hamlet’s friends are brought in to spy on him; his girlfriend Ophelia becomes a pawn to deceive the prince; and poison is everywhere from spoken words to the tips of swords. As the play reaches its climax the layers of carefully built deception come crashing down on both the just and the unjust, leaving, in this play of questions and ambiguities, few of those questions answered, and even more questions to ponder. 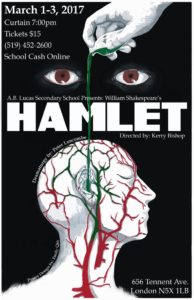