Through the eyes of a giant talking Fish, a magical encounter of two girls across time and oceans tells a story of an eccentric family and incredible natural disaster in Japan. A multimedia one-woman theatrical show deeply inspired by 2011 Earthquake and Tsunami. 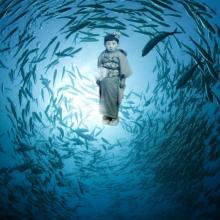