« Run For Your Wife

“Call it sad, call it funny. / But it’s better than even money. / That the guy’s only doing it for some doll.” The legendary, multi-award-winning, musical comedy classic about rolling the dice and falling in love under the lights of Broadway, the brassy, immortal score and witty book, makes Guys and Dolls Jr. a crowd pleaser. In New York City, gambler Nathan Detroit tries to find the cash to set up the biggest crap game in town while the authorities breathe down his neck; much to the chagrin of his long suffering fiancee Adelaide. Nathan turns to fellow gambler, Sky Masterson, for the dough, but Sky ends up chasing the straight-laced missionary, Sarah Brown. Guys and Dolls Jr takes us from the heart of Times Square to the cafes of Havana, but everyone eventually ends up right where they belong. 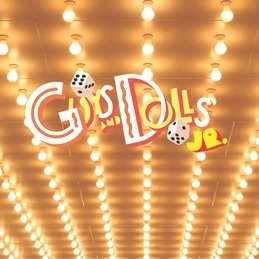