The story of the strange relationship between a comedian and his extremely conservative father; a man who has died… more than once. 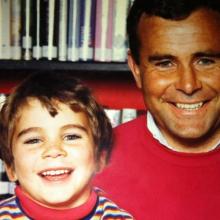