The emotional, powerful, and heartbreaking true story of family, music, addiction, and love from one of the fringe’s most popular performers. 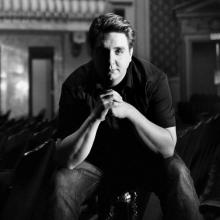