Run For Your Wife

A London cab driver, John Smith, literally has two lives, complete with two different wives, Mary and Barbara. Somehow, he manages to juggle them both without arousing suspicion. However, he gets caught up in a mugging, and wakes up in a hospital. He ends up with the wrong wife by his side, and is forced to deal with explaining things to both of his wives and the police all at once. 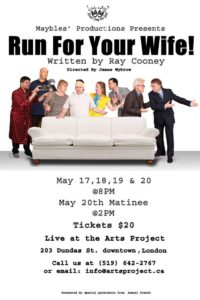