« The Song of Calliope

Whisper Into My Good Ear »

My Planet and Me

A sad millennial receives telepathic communications from a distant planet.

Like. What do you even do in that situation? I don’t have a framework to process that, it’s ridiculous! Anyway. Come to my one-human supersensory speculative storytelling show to “find out” how I “dealt with it”. 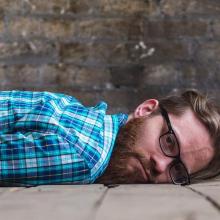 4 thoughts on “My Planet and Me”