Daughters of the now-defunct Merkin Empire leave the house for the first time in a decade to present their Ultimate Piece of Art. Think Olsen Twins + Grey Gardens + The Muppets. 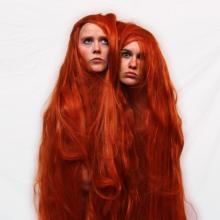 8 thoughts on “The Merkin Sisters”