An interactive Magic-Show that integrates traditional stories/folklore to promote Aboriginal culture. On this journey of self-discovery, Lupi has handpicked his favourite stories, transforming them into visual works of “magic”. This performance will intimately raise a spark of wonder that transcends language, and opens up a new world for you! #EagleWolfBuffaloBearLooking4diamonds Everyone is welcomed and encouraged to attend. 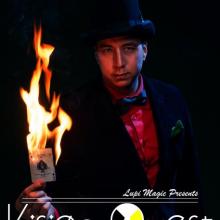