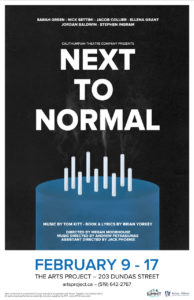 Next to Normal is the fourth production from London’s year-and-a-bit-old Calithumpian Theatre Company. It’s a rock musical that focuses on a person with a mental illness, as well as (per Wikipedia) “address[ing] the issues of grief, suicide, drug abuse, ethics in modern psychiatry and the underbelly of suburban life.”

I qualify the additional aspects because for the most part, while they’re included, they’re hardly addressed. Which is fine—a play should be about what it’s about—but they’re little more than colour.1 The piece is about Diana and her “invisible girl” Natalie, who may or may not be following her distant mother’s inadvertent and unwitting example. (Some parallels to Carrie Fisher’s later life can easily be drawn, although it seems unlikely the writers would have known of her experiences.)

As such, the standout performance is by Sarah Green (Diana). She’s alive and animated on the stage at all times, giving her character life even in the rare instances when she isn’t the focus. Even during some more subdued scenes in the second act, there’s an understated spark that lets you know she’s the same person even though she’s changed.

Ellena Grant (Natalie) nicely fulfills her roles in the primary and second storylines, as a bright but ignored teen who’s discovering that rebellion isn’t such a bad thing. Her outbursts, reactions, and subsequent actions ring very true. Grant is supported in the B story by Jordan Baldwin, who brings depth through his performance to what’s otherwise a one-note character (Henry, the “perfect”… boyfriend?).

The other three men in the cast, unfortunately, aren’t given much to work with as characters. Like Henry, they’re written fairly flatly: one, after a certain point, is lit almost exclusively in red, indicating his malevolence; one is given some emotional solos that seem to come out of nowhere; and one plays two entirely interchangeable roles (probably a deliberate choice on the part of the writers). They’re all important to the plot, and all of the actors are capable of what’s asked of them, but there’s not much meat there; in two cases they’re primarily foils for Diana, and there’s a more than casual suggestion in Megan Moorhouse’s direction that Diana has a relationship with the last that’s completely inappropriate for any number of reasons.

The minimal set—a dining room table, some chairs, and some art—is well-used to represent various scenes, including a surprisingly effective piano studio (with some of the more credible fakery of playing the instrument that I’ve seen anywhere). The ambitious lighting doesn’t fare quite as well, with several changes that seemed unnecessary and blocking that put some of the actors in shadow. I’m torn on the thrust layout; on one hand, it suits the “room” idiom of the production, but it also restricts the ability to separate locations to merely happening upstage (in the “dining room”) or downstage (generally office space).

Despite being in the small confines of the Bruce B. Johnson Theatre, the actors and musicians are all amplified. I suppose that’s because this is a “rock musical”, but it’s to the production’s detriment: the lyrics are muddied, often beyond comprehension, when more than two performers are singing, and they’re lost entirely when the actors try to modulate their dynamics and the band has kicked into a higher volume. The amplification is also completely non-directional; the actors, just a few metres in front of the audience, sound as if they’re singing from the booth.

Despite these criticisms—and I haven’t mentioned the title drop or having the entire cast line up to deliver the big closing number—Calithumpian’s Next to Normal is worth seeing. It’s not the company’s best, but it’s got some excellent performances. Starlight Tours composer Leslie Arden, at a recent panel discussion at the McManus, distinguished the Broadway Musical as a unique art form that’s rarely seen outside the United States; I think this is the sort of show she meant. Perhaps most importantly, it provides some insight into the effects of and treatments for one type of mental illness (for better or worse).

1Then again, the script won the 2010 Pulitzer Prize for Drama, so who am I to criticize?

2 thoughts on “Next to Normal”