« The Legacy of Tecumseh

Never Have I Ever: Situations We Never Thought We’d Be In! »

As young men, friends and rivals Zoltan and Dariusz were world-class fencers—medalists at the ill-fated Munich Olympics of 1972. Now, some four decades later, long estranged, Dariusz seeks out his old friend. More than time separates these two vigorous men. What Dariusz demands of Zoltan could get one—or both—killed.

Cascading memories. Beleaguered honour. Flinty stoicism. Flashpoint. What is the right way for a man to live? Attack, or parry? 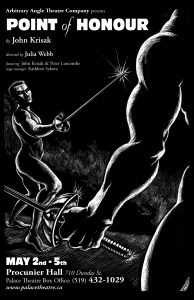