2018 marks Theatre Soup‘s 20th anniversary! To celebrate these years of producing exceptional theatre and building community, with over thirty productions as part of our history, the company will host Soup’s On! Celebrating 20 Years of Theatre Soup, an evening of live performances of three original short plays written by local playwrights. This special anniversary event will be directed by Justin Quesnelle and will reunite the company’s founders Anne Marie Caicco, Lil Malinich, and Sookie Mei, who will star in the original plays. The performances will be followed by an Unscripted panel discussion highlighting Theatre Soup’s history, as well as the contributions of artists and audience members through including them in the dialogue. Light refreshments and appetizers will be served after the performance and during the Unscripted discussion. 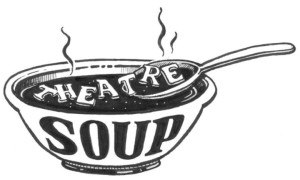