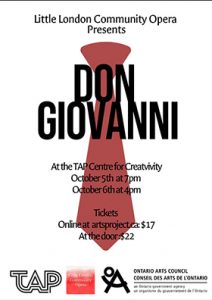 It’s hard not to draw parallels between Don Giovanni and real life on a day when an(other) alleged serial sex offender is named to the United States Supreme Court. Then again, it would have been hard not to draw parallels at any time in the last several years since #MeToo became part of the vernacular, or at any time in the last three-hundred-odd years since the opera was first performed.

To that end, Little London Community Opera has updated the setting to a modern-day legal firm, with Giovanni a sloppy, pill-popping stain of a human being, and Leporello his culpable assistant. After attempting to rape (he’d certainly claim “seduce”) Anna, a junior associate, Giovanni kills her father as he tries to save her. From there, the story develops into a vengeance plot by Anna and her fiancé while Giovanni continues his debauchery with engaged Zerlina and spurned Elvira.

It’s to their vast credit that LLCO (and, okay, let’s give Mozart and Da Ponte their dues as well) keeps Don Giovanni entertaining through all this. First and foremost, everyone on stage performs the music near-flawlessly; a more well-attuned ear might make valid criticisms, but this lightly-classically-trained musician was impressed. Dramatically, opera tends to require a heightened performance style, but director Margaret Martin has the cast at just the right level of restraint, occasionally (and appropriately) letting some go over the top but not into hamminess. The relationship between Giovanni (Jorge Trabanco) and Leporello (Nicholas Saika-Voivod) in particular is nicely defined, and there are moments between couples that ring very true to life. While Elvira’s storyline is the biggest stretch in the modern setting—she goes way beyond forgiving—she’s easily got the most emotional depth of any of the characters, and Natalie Gassi is right on every turn.

There are some minor issues, which are to be expected from a young company doing such an ambitious production. Unfortunately, one of them is the distractingly-operated surtitles, which is a problem for an opera entirely sung in Italian. The story comes through enough to be coherent, however, and it’s a flaw I’m told will be resolved for the second and final performance on Saturday. There are also occasional issues of pacing, both literally by performers with nowhere to go and figuratively with a stage devoid of any performers; the former seems due to set design more than anything, and the latter is almost certainly due to the minimal nature of the production, which is at odds with the amount of music needed to allow the huge cast in a typical large-scale production to move around.

In the fictional world of Don Giovanni, the main character gets what’s coming to him in the end. In the real world, that’s not always the case.