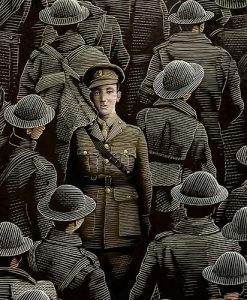 War is Hell; The Wars, However, is Wonderful

With Remembrance Day fast approaching, The Grand Theatre’s production of The Wars offers a gripping representation of a Canadian literary classic that allows us to explore the horrors of battle and how battles aren’t just fought on the front lines.

Many of us who went through the Canadian high school system are familiar with Timothy Findley’s The Wars. Dennis Garnhum’s adaptation takes some liberties with the story – and excludes some pivotal moments – but effectively encapsulates Findley’s story.

For the most part, The Wars is an extremely well-balanced production. It is well-paced, well-acted, and extremely well directed. Garnhum’s recent productions on The Grand’s stage have tended to be at risk of being overwhelmed by gimmicks and technology. In The Wars, he has found the balance between story and spectacle. Yes, there’s a massive moving part of the set, but it works seamlessly in the show and feels natural. Every movement, every set piece, and every lighting change and sound effect make a positive impression.

Just as important as the larger moments are some of the more subtle elements. Late in the second act, Jan Alexandra Smith, as Mrs. Ross, lets out a plaintive wail that is absolutely haunting. Whatever memory upon which Smith drew to mine that emotion must be harrowing.

It’s not perfect. Alex Furber’s presentation in the first act, as the lead character Robert Ross, is relatively wooden. The intent may be to show Ross’ youth, naiveté, and lack of confidence in a leadership role that he earned not through experience and effort, but rather through the benefit of his family’s name. However, that’s balanced by Furber’s excellent second-half performance and a change in physicality and demeanour that embodies his internal turmoil and change.

There are also a couple of moments that drip with sentimentality and patriotism, but feel out of place in the cadence of the production. The opening, with the cast reminding the audience of the impending Remembrance Day celebration and inviting a veteran to lead them in the singing of O Canada is wonderful from a recognition perspective, but this moment of celebration is disconnected from a play that focuses on the folly of war. As well, the emergence of a massive poppy-based piece of art is far better as a story than it is in execution. Yes, the creation of this piece, as described in the playbill, is a wonderful way to integrate veterans into this performance. However, used at the end of the production, it offers an awkward juxtaposition to the moments that preceded it.

There is a lot to really love about this production. The costumes are extraordinary. The sets are immaculately designed and creative in execution – one piece is used as everything from a ship, to the edge of a crater, to the inside of a bunker. The sound and lighting, along with the stage management by Kathryn Davies, perfectly complement the show. Whether it’s the rumblings of far-off gunfire, or the dramatic flash and soul-shaking crash of mortal shells, the sound effects and lighting are perfectly timed to the action.

The secondary characters are uniformly excellent and well-cast. There are a few odd accent-related issues during the show: one actor’s French is distractingly poor, while another character seems to lose track of the accent mid-way through the show. But there is some wonderful inclusion of French in the production, which makes sense in the context of the show. Georgina Beaty, as Robert’s sister Rowena, is delightful in her role, and John Wamsley, as Private Harris, also stands out for his inherent sweetness and friendship.

Overall, The Wars is a wonderfully balanced, well-acted show. It is a standout show that focuses on the story instead of the spectacle, and is a fitting production as we approach Remembrance Day.

3 thoughts on “The Wars”