« War of the Worlds

The Memory of Water

Three estranged sisters meet on the eve of their mother’s funeral. As they attempt to organize the funeral, alternative memories of their childhood wash over them and the secrets of their separate lives are revealed. Laughter and tears, memories fade, blur and persist as the sisters reminisce, watched over by the ghost of the mother to whom they are preparing to say goodbye. 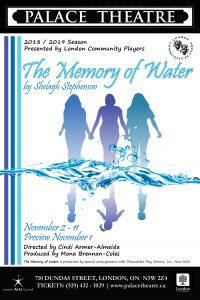