« The Hunchback of Notre Dame 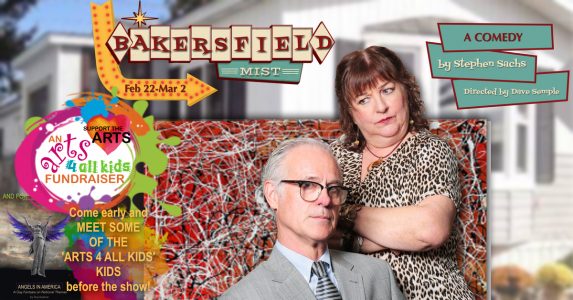 Having seen a number of documentaries and film dramas about art forgeries and hoaxes in general and Jackson Pollock in particular, I uncharacteristically went into Bakersfield Mist with a number of expectations and preconceived notions of what I was about to see. It turns out that was exactly the right state of mind to be in.

“Undiscovered” paintings by well-known artists are the holy grail and the bane of art experts. In Bakersfield Mist, noted “fake-buster” Lionel Percy knows in an instant—before he even arrives at Maude Gutman’s trailer, in fact—that her junk-shop find isn’t worth the canvas it’s painted on. But Maude has a few tricks up her leopard-print sleeve, not to mention the ones hiding in plain sight.

Bakersfield Mist is the polar opposite of Calithumpian’s Red, which was a cerebral investigation of the creative process. Here, Deborah Mitchell is a foul-mouthed, whiskey-loving ex-bartender who knows she’s got a $3 Pollock up against George Jolink’s ever-so-proper former museum director (think Niles Crane, but stuffy) in a battle of emotion, intuition, wits, and wittiness. The script leaves no callback uncalled-back, but it’s funny and surprising nevertheless.

Both actors inhabit their roles to a T, and director Dave Semple keeps their movement in the trailer set constant and interesting. Stephen Mitchell’s set is a credible double-wide, making it easy to ignore the corners added to make it fit on the small stage, and is dressed in enough flotsam—including a non-velvet Elvis and a frog on a log—to perfectly suit Maude’s lifestyle. A brief physical struggle and some sound effect placement are the only things to ring hollow. (In a nice bit of coincidence, TAP’s heating system kicked in just in time to provide a subtle dramatic background to an early otherwise silent scene.)

Based on Bakersfield Mist, Who the #$&% Is Jackson Pollock?, the documentary that inspired the play, is next on the list of films about art that I want to see. I’d suggest that the play, a combined fundraiser for Arts 4 All Kids and Calithumpian’s upcoming production of Angels in America, be next on your list of theatre shows to catch.