So you think fifty is too late to shake things up and put yourself out there? Ally doesn’t think so and if getting back in the game with bags, sags, and wrinkles isn’t enough, she dares her friends to take a chance and join her in the uncertain world of online dating. The results are hilarious and touching and might make you wonder if anyone is ever who they say they are. This play gives us a heartfelt look at friendship, love, and secrets among five women who have shared everything. They prove it’s never too late to take a chance, never too late to learn from each other, and never too late to surrender your heart. 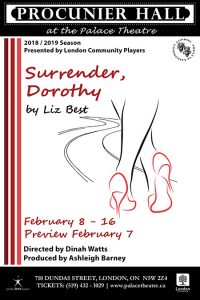