The Great Lakes Suite and Other Canadian Adventures »

The Seussification of A Midsummer Night’s Dream

Experience Shakespeare’s beloved comedy in a way you’ve never seen it before! Following our Seuss-ifed version of Romeo & Juliet comes the Bard’s most beloved comedy once again receiving the full Seuss treatment in this playful adaptation. Two madcap Narrators chronicle the tale of the mixed-up lovers as they wander through a forest full of whoosh bush tush beasts and fairies dueling with bumballoon swords. Told in rhyming couplets, this reimagining is how Shakespeare’s magical tale might have played if Dr. Seuss had gotten his hands on it! 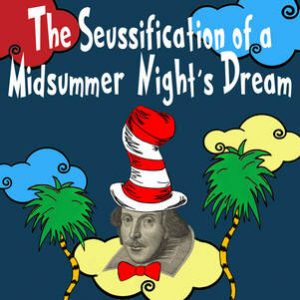