In the nursery rhyme justice system, the people are represented by two separate yet equally important groups — the detectives, who investigate the crime, and the magistrates, who prosecute the defenders. These are their rhymes. The Inspector and the Punnish Sir (Yes, he’s always scrambling for egg puns!) have been called in to investigate a crime scene where a Mister Humpty Dumpty has been found shattered and fowl play is suspected. Can they solve the c-rhyme? With hilarious musical numbers like Mountain of Love, Eggicide, and What the HONK Is Going On?, the yolk’s on you if you think this tongue-in-cheek musical is for young children. There are so many puns and plot twists in this Law and Order spoof, even the playwrights were surprised by the ending! 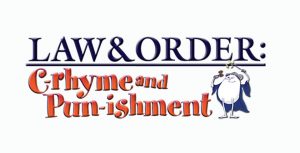