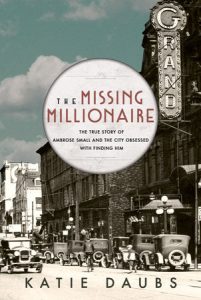 The Missing Millionaire: The True Story of Ambrose Small and the City Obsessed With Finding Him
By Katie Daubs
Published by McClelland & Stewart
ISBN 978-0-7710-2517-4

“Ambrose Small has been trapped in the infinite possibility of life and death for a century,” writes Katie Daubs in the concluding chapter of her book about the one-time owner of London’s Grand Theatre. It’s an intriguing and entertaining recounting of Small’s life and disappearance, those who knew (and loved?) him, and the city where he thrived (often), failed (several times), and ultimately… well, that would be telling, wouldn’t it?

Like many in the London theatre community, I was familiar with Ambrose J. Small primarily as the purported spectre who occasionally haunts the Grand Theatre (né The Grand Opera House). It’s rumoured—that word comes up a lot when discussing the impresario—that his body was burned in the furnace of the theatre; that’s the story presented in various editions of The Lost Soul Stroll, the former late-October ghost walk that took patrons on a tour of downtown to meet some of our more notorious historical figures. I’ve even heard it claimed that the Grand was Small’s favourite theatre, among the tens he owned across Ontario.

But The Missing Millionaire‘s scope is much more vast than this city, which only warrants three mentions in the almost 300-page book (plus over 50 pages of references). It’s a highly-researched and well-sourced volume, written in a personable style that will be familiar to readers of Daubs’ features in The Toronto Star; as in those pieces, she seamlessly ties together modern interviews and observations with historical context and vivid details of the people and places involved. And she’s not afraid to be funny—on at least three separate occasions I laughed out loud at her footnotes, and there’s a brief anecdote involving a cemetery that’s set up and paid off perfectly.

Small is undoubtedly the star of the piece, but he’s supported by a cast that’s no less interesting, including his wife Theresa, mistress Clara, and business partner Jack; after his disappearance (on page 89!) police detective Mitchell and a number of others join the plot. While it must have been tempting to turn the story into a dime-store novel at this point—particularly with the presence of tabloid writer and conspiracy theorist Patrick Sullivan, whose bombastic articles are liberally quoted—Daubs wisely refrains from going the lurid route.

My one criticism of the book is with the few photographs that appear in the text. The reproductions of photographs and documents are small enough, and the contrast and halftone effect severe enough, that they’re often illegible. (I’ve been part of the editorial process on some locally-published books and reproduction has been a frequent issue, so perhaps I’m a bit sensitized to it; similarly, there are a few typos that I caught, including one in an important and well-known date, but I don’t fault the author as much as the editor on those.) However, they aren’t needed to understand and enjoy the book as a whole.

In this hundredth-anniversary year of Ambrose J. Small’s disappearance, The Missing Millionaire stands as a fitting remembrance of a man and a time, both gone, that upon reflection don’t seem quite as alien as we might think they would be.

Katie Daubs will be part of a panel discussion at the Grand Theatre on Monday, December 2, at 6:30 p.m., the 100th anniversary of the last known sighting of Ambrose Small.