« The Lion, the Witch and the Wardrobe

In Superheroes, Unite, the citizens of Nova City need a patron superhero to save them from the evil clutches of the nefarious Colonel Mustard and his sidekick Hemlock. So what do they do?  They hold auditions!  Legions of fantastic, incredible, and uncanny characters descend upon City Hall hoping the mayor and police commissioner might marvel at their strange powers, which range from super strength and super speed, to mind reading and animal whispering, from quoting Shakespeare to pointing out irony. Watch out for when Colonel Mustard unleashes a surprise attack on City Hall, both the mighty and the average must join together to bring justice and security to Nova City. 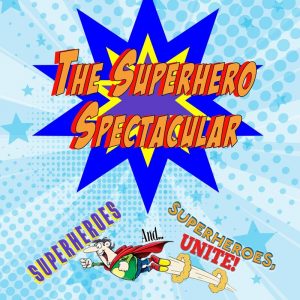