Adapted from the film The Birdcage, this production is one-of-a-kind Drag Show + Comedy.

We have partnered with local community actors and talented Drag Queens to bring you a performance like this city has never seen.

Our production is set in the early 2010’s in a drag club and apartment on Rue Saint-Catherine in Montreal. Robbin and Dani have lived together and run the 80’s theme club, the Birds’ Nest, for over 30 years. The couple’s son, Jordan wishes to marry the daughter of a conservative family from Saskatchewan and all hell breaks loose when the two families come together for dinner. 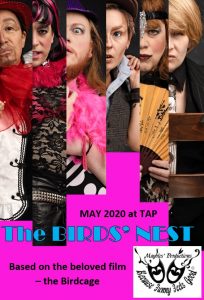