Home for the Holidays: A Theatrical Concert 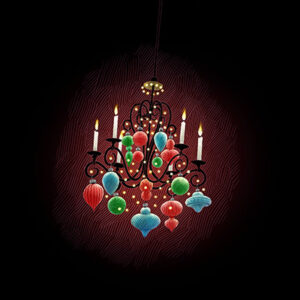 A Light, Welcome Grand Return Home for the Holidays

Home for the Holidays: A Theatrical Concert is unabashedly a celebration of theatre in general — and, more specifically, a celebration of The Grand Theatre itself. There are gifts for everyone in the production, and while a couple of those gifts may be of the “tie” variety, there are no lumps of coal to be found. It’s a pleasant, family-friendly, holiday show that celebrates the seasons (plural intended) and the gifts the newly renovated Grand brings to the Forest City.

The one gift the production doesn’t bring is the gift of subtlety. It is musical theatre at its best and worst; it is boisterous and rambunctious; at times it hits you over the head with its progressiveness; it is sweet to the point of saccharine. And even if after all that you still didn’t get the message, the production delivers it again — literally in giant, neon letters.

But it’s the holidays. If we can’t embrace a little over-the-topness during the holiday season, when can we?

I will admit my personal biases here. I love the holiday season. My Christmas tree has been up for a couple of weeks now; I voluntarily Whammageddoned myself (after all, who would intentionally deny themselves the festive vocal stylings of Messrs Michael and Ridgeley?); and I wholeheartedly embrace a winter wonderland. So that’s the lens through which you should read the review.

Running at 90 minutes with no intermission, the show moves along briskly. And the talented cast far outshines the thin foundations of the production. Home for the Holidays is curated instead of written, and it shows. Some of the transitions seem forced and loosely tethered to the action on the stage. Some of the usage of props seems superfluous. But what’s truly important — the cast, their vocals, and the crew — comes shining through.

The recognition of the latter is one of the most endearing parts of this show. For decades, The Grand has put on productions and while those on stage reap the laurels (or, sometimes, suffer the criticisms), the crew that sets the foundation upon which the performers are able to shine toil in anonymity. Home for the Holidays allows them their moment to shine. The backstage and the wings are brought onto the stage and throughout the production, various crew members are integrated into the production and recognized for their work. It’s a wonderful addition to the production, fits in with the celebratory nature of the show, and while it teeters on the brink of self-indulgence, it never fully tips over into that realm.

It’s hard to single out any of the eight singers, as they all brought their own unique perspectives to the production — which, in part, is representative of the inclusivity and diversity that this show celebrates. Josh MacInnis, in their debut on the Grand stage, threatened to steal every production in which they were featured. Masini McDermott and Elena Reyes brought the vocal fireworks and passion — and their shared duet celebrating the importance of people of colour in a country where only whites are non-hyphenated Canadians was a highlight of the show; Gavin Hope’s booming baritone rooted the show’s soul, Justin Eddy’s enthusiasm and footwork brought an endearing element — even when he waxes poetic about his “hatred” for the holidays; Gabi Epstein combined comedy relief with elite performance chops; Mark Uhre seemed to play more of a “glue that holds everything together” role, which made the moments where he stepped into the spotlight (and owned it) all the more welcome; and Blythe Wilson’s experience and talent were on display throughout.

Due to the diversity and abilities of the cast, both as individuals and combined as an ensemble, the production’s able to provide something for everyone. Whether your tastes run to the classics (which were wonderfully presented in a rapid-fire vocal battle) or if you’re looking for something more contemporary (Dan Perrott’s Covid-era romance tune I Need to See Behind the Mask and Why Do I Live Where the Air Hurts My Face?), you’re sure to find something that resonates with you. Secular celebrations, Christianity, Judaism, and Indigenous traditions all get a moment to shine. Songs are performed in English, French, Spanish, and even a touch of Latin. It is refreshingly gender inclusive and celebrates the importance of inclusivity.

As much of a celebration it was for theatre, it was clear that the audience was ready to join in. The production opens with the “ghost light” that stays on when the stage is “dark.” When it’s shut off to indicate the return of live theatre, the crowd roared and came to its feet. It’s the first time I’ve seen a standing ovation at the start of a production and it felt like a moment of catharsis for a community long denied the opportunity to share in the delights of the stage.

In the end, Home for the Holidays is everything a festive revue should be: it’s a little bit hokey, it’s cheesy and sugary-sweet. It’s all about the music and the people, and it celebrates all the seasons. And after a year when the stage was dark, it’s nice to have a little festive lighting to brighten up the stage.