« Home for the Holidays: A Theatrical Concert 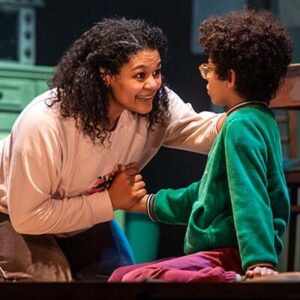 A Room with Too Many Views

Sometimes a story just needs to be left alone to tell itself. All the bells, whistles, and gimmicks in the world don’t serve to amplify the message, but rather subjugate it and diminish its resonance. The long-awaited adaptation of Room serves to drown its three superlative elements in a sea of stimuli, questionable decisions, and pacing issues.

The three superlative elements? An incredible story, penned by Emma Donoghue, and the two leads: the always delightful Alexis Gordon as Ma, and Lucien Duncan-Reid as Jack, who play the two key roles of a young woman abducted seven years previously and her born-in-captivity son, who knows nothing of the world but the titular room, in which Ma and Jack are held.

Given time and space to breathe, those three elements alone form the foundation of a powerful story that would stand on its own. Yet, a series of creative choices have served to undermine the effectiveness of that story.

For context, I came into this production having not read the book nor having seen the movie. I was aware of the plot through cultural osmosis, but my impressions have not been coloured by print or film versions.

Room was originally presented on stage four-and-a-half years ago in London, England. It then ran in Dublin, Ireland. The version of the play on the Grand Theatre stage is a second, revised version of the play, one that artistic director Dennis Garnhum in his program notes describes as having undergone “many changes, some significant rewrites, and some considerable design reimagining.”

What it truly needed, though, was an editor.

Gordon and Duncan-Reid are stellar in their roles. They convey desperation, hope, joy, sorrow, anger, and resolve in equal measure. They are able to effectively play off each other throughout the play, as Gordon’s Ma yearning for freedom eventually conflicts with Duncan-Reid’s desire to return to the only life he’s ever known. Gordon’s elite performance comes as no surprise as she’s been a standout in her previous roles on the Grand’s stage, including in Mary Poppins and A Christmas Carol. Duncan-Reid is a revelation. And, in fact, his maturity and performance highlights one of the questionable creative decisions.

Duncan-Reid’s Jack is five years old. Sure, he may play the role a touch more maturely than your average five-year-old, but it’s believable. But that is contrasted by a character “SuperJack” — a manifestation of Jack’s inner thoughts. The idea of the role is acceptable, in that it’s intended to allow an older actor to deal with the heavy lifting of dialogue and song, but it’s the directorial choice of having Brandon Michael Arrington execute a puerile performance in the role that is off-putting. He plays almost a caricature of a child — a toddler at best — that never aligns with the way Duncan-Reid commands the role. Yes, Jack’s got developmental issues relating to a lack of experience, but nowhere does he come across as infantile – yet that’s what SuperJack is.

And the presence of SuperJack can create confusion in terms of perspective. For the majority of the play, we see the experience through Jack’s eyes — and the staging does an amazing job of using a rotating set to literally reframe the production so we see key moments from his perspective. Yet there are times when Jack’s nowhere in a scene, yet SuperJack remains. Like early-years Snuffleupagus or Polkaroo, SuperJack doesn’t exist for others, but if that’s the case, why is this manifestation present when the play shifts to Ma’s experience?

The pacing is off as well. The first act, which deals with the terror of isolation, captivity, and rape, moves far too quickly despite its lengthy run time. There is never a time when key moments or pivotal scenes are allowed to breathe — and, more importantly, resonate with the audience. We are quickly shifted to the next image, act, or song.

Look, there are examples of challenging topics being successfully represented on stage in musical form. Rent looks at the challenge of living in the shadow of the HIV/AIDS crisis, Dear Evan Hansen tackles suicide, and Les Miserables wasn’t exactly a barrel of laughs. But some topics don’t lend themselves to song. There’s yet to be a production of Schindler’s List: The Musical and there’s no ABBA-inspired stage version of Sophie’s Choice.

The songs are sung well — Gordon’s in particular were standout vocal performances. But the lyrics were simplistic and, at times, the vocals were hard to hear, so the idea of using song as a narrative device to drive the story forward was sometimes compromised by production values. And the fact that song was used as a narrative element only served to blunt the message that was being portrayed. In one song, Gordon emerges in the midst of being violated to sing a song that’s intended to illustrate her resolve and how she’s able to disassociate her physical self from her emotional experience all in the name of protecting her son. But it felt misguided and it blunted the impact of the experience for the audience. Using a monologue instead of a song would have drawn the viewer deeper into Ma’s experience. While the songs served to mitigate the lows, they also had the same effect on the highs, and the euphoria we are meant to feel at the end of act one was muted by extension.

The second act was hectic and, at times, dizzying — both literally and figuratively. A rotating three-element stage was overused and multiple plot points were quickly introduced, executed, and resolved in an apparent race to get them all in the final hour. Certain scenes, such as one that takes place in a mall, could have been sacrificed at the altar of expediency as they did not bring anything new to the experience and only served to reiterate certain cultural realties that Jack now faces as the celebrity-du-jour in a macabre news cycle.

Room is frustrating because there were so many good elements, but they were overwhelmed in an attempt — like the titular room itself — to have everything and the kitchen sink packed into its 2:40 runtime. And while I’ll never criticize someone for taking a chance and trying something new, the reality is that sometimes those creative decisions don’t pan out and have the opposite of the intended effect.

Too many views ended up obscuring Room‘s true strengths: its story and its actors. A less-is-more approach — including eliminating the songs — would have truly let this production sing.