« Sally Sells Seashells (And You Can Too!)

The Comedy of Errors

Set in the Greek city of Ephesus, The Comedy of Errors tells the story of two sets of identical twins who were accidentally separated at birth. Antipholus and Dromio of Syracuse arrive in Ephesus, which turns out to be the home of their twins, Antipholus and Dromio of Ephesus. When the Syracusian’s encounter the friends and families of their twins, a series of wild mishaps based on mistaken identities lead to wrongful punishments, a near seduction, an arrest, and false accusations of infidelity, theft, madness and demonic possession. This production will be set in the 70s.

The Comedy of Errors is one of Shakespeare’s earliest plays; one of his shortest and most farcical comedies, with a major part of the humour coming from slapstick and mistaken identity, in addition to puns and word play. The events of the play occur over 24 hours.

Our rain venue is Conron Hall in University College; ticket holders will receive notice of any venue change as soon as possible. 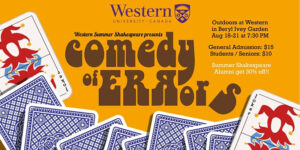 Presented by Western Department of English