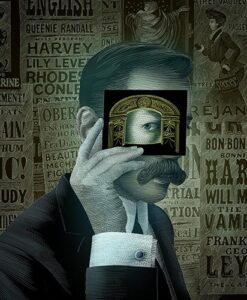 Grand Ghosts: An Homage to Everything in Dire Need of Editing

Grand Ghosts is an exercise in creativity centred around Ambrose J. Small’s attempt to self-exorcise. And in the end, the result is an oft-polarizing experience that would have benefitted from exercising some restraint.

Grand Ghosts is a celebration of theatre’s past, brought to life for a modern audience. It pays homage to the vaudeville era, silent films, the advent of talkies, and legacy musicals. It combines Clara Bow vibes with a Buster Keaton aesthetic, with a hint of slapstick and farce thrown in for good measure.

It is, in many ways, a theatre aficionado’s play. And that has its positives and negatives.

It seems obvious to say, but your appreciation of Grand Ghosts will rest solely upon your pre-existing personal preferences. Many of the styles embraced and emulated in this production are long out of fashion — and while some will say deservedly so, others will embrace the nostalgia of the production. Jessie Gervais’ performance of Ambrose Small bears an uncanny resemblance in form and delivery to Will Ferrell in Anchorman — again, if you find that type of performance entertaining, you’ll enjoy this. As someone who doesn’t like that style of humour, it’s safe to say that coloured my interpretation of the production.

As navel-gazing as the premise of this production is — Ambrose Small is the former theatre magnate who was responsible for the construction of the Grand Theatre itself, then disappeared after selling his theatre empire, only to allegedly haunt the current structure — the execution of the production amplified that internal focus. There were so many nods and winks — often literal — to inside theatre facts and fourth-wall breaking, that it often felt exclusionary to casual theatre viewers. There’s one thing to embrace die-hard theatre fans and experts; it’s another thing to get too wrapped up in insularity.

This is visually reflected in the staging. The spartan set features two rows of the Grand’s proscenium arch, creating a stage-within-a-stage dynamic supported by the production under the actual proscenium arch. This serves to reinforce the idea that we’re knowingly watching a play within a play, which is the foundation upon which this production is built. The Grand Ghosts, as they are, gather annually to recreate the final days of Small. Ghosts, who in their living days ranged from acrobats, security guards, to construction workers, are cast by the ghost of Small to play key roles in his life, from his trusted right-hand man Jack (Cyrus Lane) to his beleaguered wife Theresa (Jan Alexandra Smith) to the object of his final love affair Clara (Tess Benger). The intent of this annual production is to recreate the final days, but this year, Small has taken over the production with the intent to discover who — if anyone — brought about his eventual demise. After all, Small’s disappearance is one that has never been solved and the Grand Ghosts are conscripted to help Small find out the truth and receive the “key” that will free him from an eternity of haunting the theatre.

As mentioned above, this play throws everything it can at the audience. There are some extremely creative and endearing moments — Benger’s Clara physically emulating other character’s reading of her letter was incredible; a human representation of the shell game is another that stands out; not to mention the clever use of tap dancing to create rhythm by Andrew Prashad’s emcee, and the appreciated physical representation of that Vaudeville standard “hook” — but there are many others that don’t land. The transitions where all the extraneous characters suddenly jump out and shout the new location was mildly amusing at first, but immediately became cloyingly puerile. And the forced insertion of “London” jokes felt like a need to use up left-over puns from This London Life — and with equally dreadful results.

The second act picks up steam if only for the fact that it fully descends into absurdity. In many ways the pretense of structure is thrown away for an act that revels in surrealism and chaos. Its momentum is largely stalled by a redemption arc that can be seen coming a mile away and undoes much of the character development of the previous two hours.

This is a production that throws everything at the audience — and often feels like it’s trying to cram too much in. Some of the meters of the songs are compromised by trying to cram too many lyrics into the beats — devolving, at times, into an almost spoken-word-style performance.

Ultimately, it’s a production that needs editing and refinement. Standout performances like those of Benger, Katelyn McCulloch as Jennie the Bookie, Prashad, and Christian Murray’s second-act scene stealing officer Mitchell poke through the clutter and chaos to highlight what could have been.

It’s referenced in the production notes that this play was six years in the making, yet it still feels rushed and unrefined. With so many homages, references, and the need to ensure all the internal desires are satisfied, there’s a lack of attention to the greater whole. Grand Ghosts is less than the sum of its parts and could have benefitted from addition by subtraction.

It can’t even be said that this is a play that is uniquely London. It is unique to the Grand. And while it is a celebration of the theatre, it presents as one that’s best intended for those already in the know.

And for Ambrose himself? With no spectral appearance, we can’t be certain what his thoughts are on the production. But with no stage malfunctions or theatre mishaps, those who believe can take heart in the fact that the man himself is satisfied with the end result.