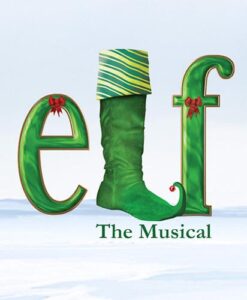 I need to start this review with a couple of key caveats: first, I love the holiday season. Christmas is my thing and I love almost everything about it; second, I can’t stand Will Ferrell, and didn’t like the movie version of Elf.

Fortunately, the Grand’s latest production of Elf is a perfectly packaged gift of holiday joy that exceeds the film that inspired it, and features a Buddy that’s far-and-away a more charming, enjoyable, and downright-Elf-like than both the film version and previous Grand iteration of the production.

Simply put, Izad Etemadi is a revelation as Buddy. It’s a character that can be so syrupy-sweet as to be cloying. It’s a character whose enthusiasm can easily tip into annoyance. Yet Etemadi manages to maintain a level of enthusiasm that’s nearly off the charts throughout the show – he reaches the precipice of obnoxiousness, without ever stepping over that line. Instead, by sheer force of will, he carries the audience to the peak of excitement, without ever making it annoying.

Yes, there are some interesting moments – like early in the play when Etemadi’s Buddy is being celebrated for his great height and being the “best basketball player” amongst a crowd of elves who are, being generous, slightly taller than the “tallest” elf. Yet that visual challenge is easily overlooked simply due to the enjoyment that Etemadi brings to the role. He could be half the size of everyone else on the stage, yet still stand head and shoulders above them all just through his enthusiasm.

The Grand’s production hits all the right notes. There are a few wink-and-nod moments, such as Church’s Santa discussing how they are going with a different “complexion” for this story—a moment that the crowd appreciated and was a welcome bit of reflexive humour that didn’t devolve into the overt self-referential “wit” of which a few recent Grand productions have been guilty.

Dennis Garnhum displayed a deft touch as a director in this production, with nothing feeling out of place or over the top. In previous productions, he has tended to bring in grand visual elements that serve to distract, but with Elf, full credit is due for him allowing the story to play out and complementing it with an ambitious, impressive stage and chorus that only serves to amplify the message, never distract from it.

The set is stunning. It opens to a North Pole scene filled with white shapes and festive lights. And this set is masterfully manipulated to transition to everything from a New York City streetscape to a department store interior to and office and to an apartment. The transitions are smooth with clever use of the set to expose desks and tables, all within the confines of the music.

The cast, as a whole, fully embraces Lisa Stevens’ choreography and, combined with a stellar festive soundtrack, the dance propels the story forward and helps to drive the characters’ progression.

If there is a fault to the production, it is that there’s not enough of Aadin Church. In the second act, as Mr. Greenway, Church gets a chance to showcase his impressive pipes — and the crowd was overwhelmed by his talent. It was a wonderful taste of his prodigious talent that left the audience wanting more.

Even before opening night, the response from the ticket-buying public has been overwhelming, resulting in the show being extended until the end of the year. And it’s clear to see why — this year’s production of Elf is a gift that is certain to keep on giving.