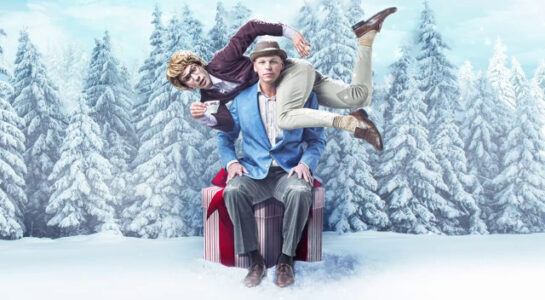 A Holiday Gift that’s Bursting at the Seams with Joy

The holidays, at their best, are about spending time with friends, family, and loved ones. With James & Jamesy bringing the penultimate performance of their cross-Ontario (plus Winnipeg) tour of O Christmas Tea to London, it felt like old friends returning home — and bringing the gift of a production that’s bursting at the seams with joy!

James & Jamesy are veterans of the Fringe circuit and were, without a doubt, consistently one of the “must-see” shows back when London had a proper Fringe Festival. Since London Fringe’s demise, the duo of Alastair “Jamesy” Knowles and Aaron “James” Malkin had not been back to the Forest City. But the duo made a triumphant return as part of its 32-show tour.

For those who are familiar with the Fringe productions of James & Jamesy, O Christmas Tea represents a refinement of their earlier work on the grandest stage. It is bigger, better, more all-encompassing — but it still has the heart and warmth that serve as the roots of any James & Jamesy production. The duo’s shows are always centred around the concept of embracing the simple joy of play and celebrating imagination.

The narrative is centred around the duo’s weekly tea date. It’s a regular engagement from which irregular experiences flourish.

Both performers excel at multiple crafts: mime, physical comedy, clown performances, and breaking the fourth wall. Through their adventures of imagination, they draw the audience in — both figuratively and literally. Audience members are conscripted to play key roles in the narrative of the duo’s imagination, and those who aren’t lucky enough to be chosen still participate through call-and-response (when the audience picks up the cues) and song (including fêteing the Queen in song).

The greatest magic that James & Jamesy bring to O Christmas Tea is their ability to make everything they do feel fresh, organic, and spontaneous. We can see by the meticulous physical interactions, cadence, and choreography that hundreds, if not thousands, of hours have gone into the production, but despite those rehearsals, the show never feels rehearsed. Their mastery of the production allows them a solid foundation upon which improvisation, wink-and-nod references, and spontaneous audience interaction can be successfully built.

O Christmas Tea is deceptively simple. The simple set (a few giant balls, a table, two chairs, and, of course, a tea set) are all that’s needed to allow the duo to create a world of wonder, spanning from Jamesy’s home to a deserted island to the depths of the sea. Yet, the show only appears to be simple — it is a testament to the skill of both Knowles and Malkin that they are able to move through the set with a subtlety that belies the intricacies of their interaction.

True, not everything may go according to plan. Malkin’s pants split rather dramatically almost immediately in the production. But instead of getting derailed, the duo ran with it (Malkin, slightly more gingerly) and subtly included it in call-backs later in the show. It is that embrace of chaos — including actively courting it by including audience members in the interactions — that keep the production fresh and entertaining.

O Christmas Tea was a welcome addition to London’s holiday landscape. It was a wonderful return of old friends to celebrate the season and hopes for a future filled with joy, warmth, and happiness.