“You have been issued a challenge,” the Game says.

Sebastian heeds the call. He wants nothing more than to be a success in his video game—Palace Allegiance. But his teammates don’t understand. Liam is a lovesick college kid struggling to grow up. And Coby is a paranoid data cruncher with a taste for conspiracies. Darrel is on the team too, but remains a noob (he has no idea which button to push on a game controller). Our unlikely heroes—the team of ‘4ever’—struggle through their quest, both in game and “irl”.

In Real Life is an original theatre piece exploring the relationships of four college kids playing a fictional video game together. The show follows them on one night of their escapades, revealing their vastly different personalities and intertwining stories. A comedy at heart and featuring local London musical talent, this is a unique show you wouldn’t want to miss! The only question is, will you accept the challenge? 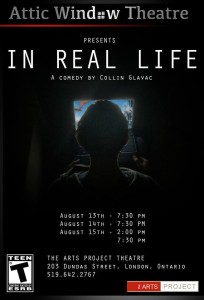