Channel Surfing’s goal is to provide Londoners with unique, original and often hilarious (notice how we said the word “often”) sketch comedy and plays.

Project G Force returns in Canuck Enough?, a question the gang must solve when they realize their Canadian passports are missing! Once again, Project G Force brings their unique brand of retro hilarious sketch comedy back for a new show! Get tickets early…and often! 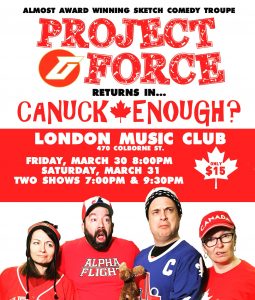 In a world without meaning… in a time of great peril… in a place not very far from here… Project G Force returns and this time it’s comical. This time the gang must work together to make a movie before time runs out while bringing you sketches based on everyday life, pop culture and of course movies! If you love Saturday Night Live, SCTV, Mr. Show or just want a place to drink, then check out their all new show, Project G Force: The Movie! 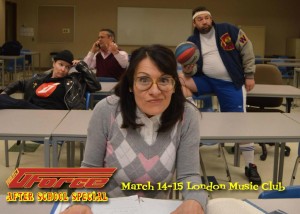 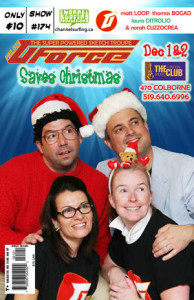 Princess Annika and the Golden Rule

Princess Annika lives in the Kingdom of Friendly, where the people are kind, the weather is fine, and the cookies are delicious.

Join the Princess on her adventure to discover something very special: The Golden Rule.

There are Kings, Queens, horses, mud and most important of all—there’s ice cream! 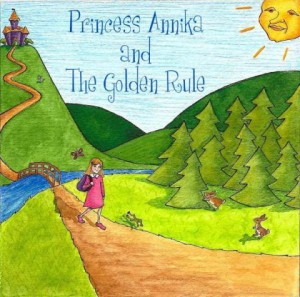 Princess Annika and The Golden Rule

Princess Annika lives in the Kingdom of Friendly, where the people are kind, the weather is fine, and the cookies are delicious.

Join the Princess on her adventure to discover something very special: The Golden Rule.

There are Kings, Queens, horses, mud and most important of all—there’s ice cream!

Laugh your way to the vacation you always wanted!!

Project G Force, London’s only super-powered sketch comedy troupe, is back! Murder, danger, intrigue and laughs follow the gang wherever they go—even when they’re on vacation in Hawaii ! Perhaps a visit from their old pals Good Game will take their minds off of things.

Dress tropical, get leid and enjoy a pretend trip to Hawaii and real trip to Hilarity Island. 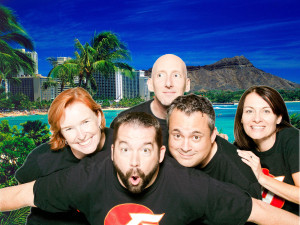 A dark comedy about weddings, family and the unfortunate problem of having the woman you love turned into a zombie. 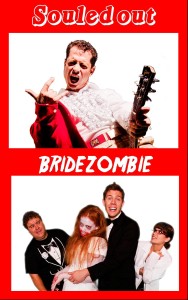 Based on a play by Leanne Olson

Dunstan Saint is the biggest Rock Star in the world. Now over 50, he’s still relevant, still a massive star and still dominating the top of the charts…how does he do it? What’s the dark secret to his success?

Now in its fourth year, Channel Surfing presents two new one act plays including Bridezombie by Leanne Olson and Souled Out by Matt Loop.

Project G Force, London’s only super-powered sketch troupe, is heading for a Beatlesque ego implosion. Can they put aside their differences to save the world from the unfunny by re-mixing their classic hits with their newer, sitar-infused sketches? Will Matt’s buttocks be helped or hindered by digital re-mastery? Stay tuned…

Are life and love controlled by fate or decisions? A hilarious encounter in a hotel room leads two lonely souls on an exploration of each other and this eternal question.

Spirits of Eldon is the sequel to last year’s successful Spirits of Petersville, which was presented at the Grosvenor Lodge. This year, another historical site, the famous London landmark Eldon House, has opened its doors and invited in a mass haunting!

There are some key differences this year, including a fiesta of frights provided by eight local writers and performed by eight local performers. Writers were asked to tie their stories into Eldon House to help honour the historic home’s 175th Anniversary. Patrons of Spirits of Eldon will bear witness to the following original tales of terror:

Safety coffins that don’t work? Something special in the pot? A voodoo priest and his friends? The secret behind an old Native blanket? Tea time with a ghost? Ghosts in the air we breathe? Spirits of Eldon is a delightfully macabre compilation of all kinds of terror!

What a perfect way to celebrate the Halloween season – by celebrating local history and local writers!

For information on this diverse evening of shivers and chills, please contact co-producer Jason Rip at 519-932-0417.

Millions of dollars…six crooks…one brain. In a heist gone wrong, six amateur crooks rob a Wiarton bank for their last (and only) big score, but end up getting closer to the money than expected. The Underachievers is a dark comedy about life in your 30s…could haves, would haves and should haves. Winner of the 2005 Brickenden for Outstanding Comedy and Sound.

Part of The Spriet Summer Sizzler

Part of The Spriet Summer Sizzler

When the world is threatened in the year 1984… only one all female (with one male aerobics instructor) military tactical unit can settle the score! It’s a totally awesome, high octane, big budget looking, 80s action adventure!

Part of The Big Comedy Go-To

A fearless group of Dungeons and Dragons geeks…er…players, face their most dangerous and life threatening adversary ever…a woman.

Featuring 5 performances of 2 one act plays…

Project G Force in Save the Funny, Save the World

A London acting company struggles to stage a comedy while real drama is unfolding behind the scenes.

In a heist gone wrong, six amateur crooks rob a Wiarton bank for their last (and only) big score but end up getting closer to the money than expected. The UnderAchievers is a dark comedy about life in your 30s; could have, would have, and should haves.

Channel Surfing Productions, presents a “One Night Only” fundraiser, in support of their upcoming play The UnderAchievers. (Hey, producing a play isn’t free!)

Comedy. Music. Drinking.
It’s the Perfect combination! See you there!

Tickets: $10, available at the door or from your “One Night Only” Rep.
Keep your ticket stub, as it will give you $5 off The UnderAchievers.