Making God Laugh follows one typical American family over the course of thirty years’ worth of holidays. Starting in 1980, Ruthie and Bill’s grown children — a priest, an aspiring actress, and a former football star — all return home, where we learn of their plans and dreams as they embark on their adult lives. The empty-nester parents contend with their own changes, too, as old family rituals are trotted out and ancient tensions flare up. As time passes, the family discovers that, despite what we may have in mind, we often arrive at unexpected destinations.

As Woody Allen once said, “If you want to make God laugh, tell him your plans…”

Accusations, mistaken identities and romances run wild in this traditional, laugh-out-loud farce. Two nuns at the Sisters of Perpetual Sewing, have been secretly making wine to keep the convent doors open, but Paul and Sally, reporters and former fiancees, are hot on their trail. They go undercover as a nun and a priest, but their presence, combined with the addition of a new nun, spurs paranoia throughout the convent that spies have been sent from Rome to shut them down. Wine and secrets are inevitably spilled as everyone tries to preserve the convent and reconnect with lost loves.

Accusations, mistaken identities and romances run wild in this traditional, laugh-out-loud farce. Two nuns at the Sisters of Perpetual Sewing, have been secretly making wine to keep the convent doors open, but Paul and Sally, reporters and former fiancees, are hot on their trail. They go undercover as a nun and a priest, but their presence, combined with the addition of a new nun, spurs paranoia throughout the convent that spies have been sent from Rome to shut them down. Wine and secrets are inevitably spilled as everyone tries to preserve the convent and reconnect with lost loves.

May 29 is a wine and cheese night – an intermission buffet is included in the price of your ticket.

What’s it like to be peered at by hungry humans?

The Lovers Landing Beach Hotel on the Gulf of Mexico has been promoted as “The home of Sandy Toes and Salty Kisses,” becoming a popular wedding destination. Mayhem ensues when the eccentric wedding planner, Madame CoCo, suddenly elopes leaving the position vacant to be filled by the owner’s Uncle Bubba, who is actually the handyman. 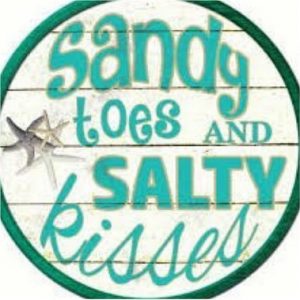 Just returning from the wedding rehearsal, everyone has an opinion about Maggie and Russell!

The kitchen of the Duncan family becomes the hub where each family member takes a turn having their say. Witness honest talks that reveal how everyone is really feeling about the big day ahead.

Maggie’s parents reflect on their marriage, the realities of getting older, and the uncertainty that lies ahead. Two sisters catch up as sisters do. Despite being close, they are polar opposites and sibling rivalry has affected their lives.

Watch the dream begin to crumble as Maggie’s older sister, Wanda, discovers that she knows the groom a little better than Maggie would like her to …and what about Alex?

Dee, a vivacious widow who experiences life to the fullest makes her living by selling phone sex while sharing her home with her son Scott, a young man just getting over a romantic break up. To further complicate matters she meets and falls for a rather staid teacher who is just getting over the loss of his wife. Scott in the meantime is trying to come to grips with the fact that his longtime neighbour and friend Jennifer wants to be more than just friends. 1-900-DEE-LITE shows us that romance has no age boundaries and that sex is fun for all ages. 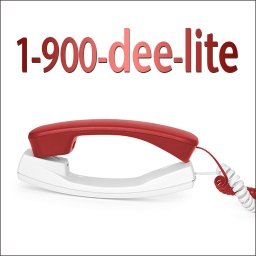 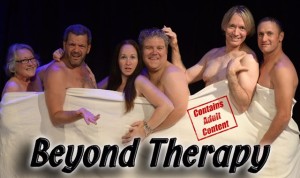 When four middle aged men on a team building exercise become shipwrecked, their pathetic attempts to get themselves rescued are hampered by their inability to co-operate as much as by their ineptitude in the great outdoors, and what should have been a bonding process gradually becomes a muddy, bloody fight for survival. 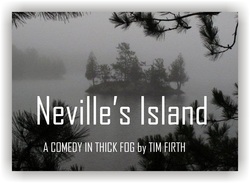 The Man From Earth

History Professor John Oldman unexpectedly retires from the University. His startled colleagues impulsively invite themselves to his home pressing him for an explanation, but they are shocked to hear his reason for premature retirement: John claims he must move on because he is immortal and cannot stay in one place for more than ten years without his secret being discovered. 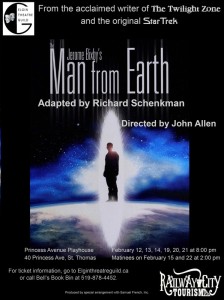 Snow White and the Seven Dwarfs

A traditional British Panto, with jokes, slapstick, a comedy cookery routine, singing and dancing. It’s a tale of a princess who meets up with 7 forest people of reduced stature, a poisoned apple and a happy ending.

Lots of audience participation, for kids and adults alike. 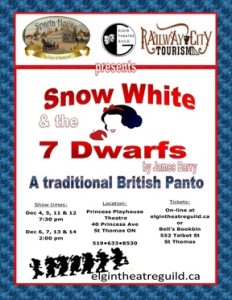 How do aging and the loss of vivacity affect baby boomer couples? What are the lengths we go to in order to feel young… connected… alive… attractive… wanted…loved?

Come and enjoy this story about a sexy romp that respectfully and intensely explores the connection between vitality, intimacy and sexuality in the “mature” years. 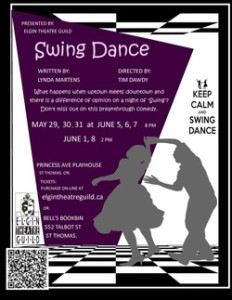 After years of traveling abroad, Avery Sutton is happy to return to the comfort of his home in Connecticut. Unfortunately, almost nothing is as he remembered it. The entire house is tilted at a distinct angle, the dog hasn’t been fed in five years, and Avery’s grandmother, who everyone thought was dead, is still alive and kicking. Forced to either accept the oddities of his family, or leave them behind, 37 Postcards suggests that you can, in fact, go home again….
You just never know what you are going to find.

Tickets: $16 in advance, $17 at the door; available online and at the Princess Avenue Playhouse box office.
March 27 preview performance: $10. 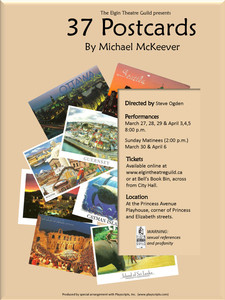 At a large, tastefully appointed Sneden’s Landing townhouse, the Deputy Mayor of New York has just shot himself. Though only a flesh wound, four couples are about to experience a severe attack of Farce. Gathering for their tenth wedding anniversary, the host lies bleeding in the other room and his wife is nowhere in sight. His lawyer, Ken and wife Chris must get “the story” straight before the other guests arrive. As the confusions and miscommunications mount, the evening spins off into classic farcical hilarity. 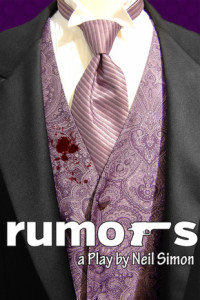 Bud is recently divorced. Molly is newly-widowed. At her husband’s funeral, an old acquaintance emerges to pay his respects, leading to a re-awakening of forgotten emotions. Through memory, the characters show the audience how Bud and Molly’s relationships evolved. Old Love is a story of romance, courtship and relationships between older adults. 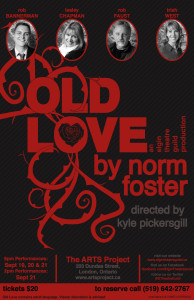 Back in the day, when they were all a lot younger, Delmon “Buck” Short, Harry Smiley and May Ludlow were in a local bar-band called The Country Cousins. Buck and May fell in love, eloped and cut a record that became a modest hit. But May soon tired of a life on the road. She quickly became fed up with the limelight (and also of Buck’s love affair with the bottle) and returned home, eventually falling in love with Harry and marrying him. Buck meanwhile has parlayed his solo act into a pretty decent career as a country rocker. Now, 25 years later, May and Harry are the parents of two teenagers, Alyson and Jake, and Harry is managing May’s family’s funeral home. Then one night, Buck Short reappears out of the blue, burned out and needing refuge (and a few other things). As these old friends reunite, they all question the individual paths they have taken. May is happy in her role as a wife and mother. Buck, now broke, has found a way to perhaps recoup some of the money he has blown over the years. And Harry, whose dream of making music for a living has never left him, seriously contemplates a radical career move. For these three former band mates, this reunion is littered with heart-warming memories, some painful regrets and perhaps a chance at something wonderful… and perhaps even dangerous. 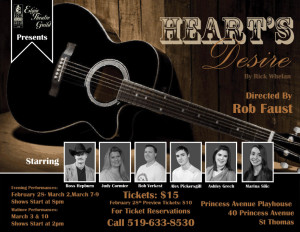 The Fox On the Fairway

A tribute from to the great English farces of the 1930s and 1940s, The Fox On the Fairway takes audiences on a hilarious romp which pulls the rug out from underneath the stuffy denizens of a private country club. Filled with mistaken identities, slamming doors, and over the top romantic shenanigans, it’s a furiously paced comedy that recalls the Marx Brothers’ classics. 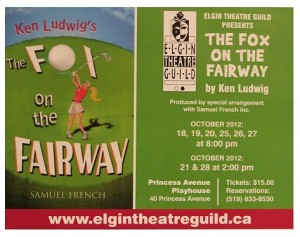 Sure, it can be lots of fun to have two gentlemen to keep you company, pay your bills (and keep you supplied with all the fish and cheddar you could ever want). But things can get pretty complicated – especially when one doesn’t know about the other – and schedules get mixed-up, and ankles get twisted, and suddenly – two gentlemen can be two too many! The misadventures and misunderstandings in this modern-day farce keep the action hopping and the laughs coming.