Way Out West in a Dress

Young actor Clarence Rawlins’s falsetto voice isn’t the only “false” thing about him after he gets himself and his acting troupe into a little debacle in Lucky Lady, Nevada. Discovering that he has misread his distant aunt’s handwritten will, Clarence learns he has not inherited a profitable saloon, as expected, but instead the Lucky Lady Salon, a beauty parlor. Flat broke, Clarence has no choice but to raid the costume trunk and transform himself into a down-on-her-luck British aristocrat, Lady Claire Rawl, now head hair stylist of the small town’s only salon. His pal and fellow actor, Roger Gaines, becomes a French stylist, Rogaine. Together with the ladies in the troupe—Heidi Gray, Bobbie Pinz and Nell Clipper—they re-open the beauty salon to great success. But, their good luck runs out when, unbeknownst to them, the owner of the saloon next door, Colt Revolver Jr., plots to acquire Clarence’s salon as part of a scheme to rob the bank. 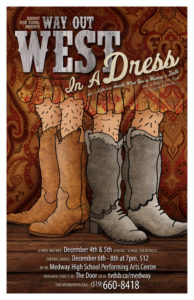