Simply put, we are four friends who are passionate about theatre arts and passionate about sharing our vision with you. Our mission is to create theatre that challenges the intellect, excites the emotion, and confronts the present.

We are looking to keep a central element to the show a surprise for audiences. The description of the show gives away the key element, so we are using a quote from a review of the show in its place that aptly describes the tone and themes of the play. “Falling: A Wake is a prayer for the departed, as well as a prayer to those who remain. It quietly, but insistently, searches out meaning in a world that often appears random, reminding us that, at some level, we are all lost souls in the dead of night waiting in the light.” – Kitchener-Waterloo Record 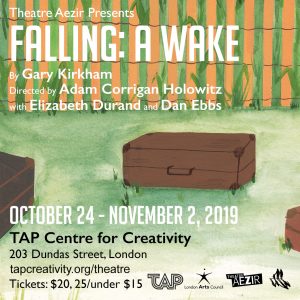 In October 1998 in the middle of the prairie outside Laramie, Wyoming, Matthew Shepard, a 21 year old student at the University of Wyoming, was tied to a fence post, severely beaten, robbed, tortured and left, alone, to die. His body — battered, bloody, barely clinging to life — was discovered eighteen hours later. He was rushed to the hospital and put on life support. He died five days later. The reason for this brutal crime? Matthew Shepard was gay.

The hate crime attracted vast attention worldwide, bringing sexual discrimination and violence to the forefront of public discourse. Tectonic Theater Project, led by their founder Moisés Kaufman, traveled to Laramie in the aftermath of the murder with the intent of creating a theatrical portrait of a town coming to grips with horrible, hate-fueled violence. Over the course of a year and a half, the group interviewed over 200 subjects, some directly related to the case and some regular citizens of Laramie. Out of these interviews, journal entries, and found texts, The Laramie Project was born. Hailed as one of the most captivating and encompassing pieces of contemporary theatre, the play shocks, challenges, and moves all who watch it as it reveals the lowest depths of hatred and greatest heights of compassion that lies within all human beings in any seemingly average community. 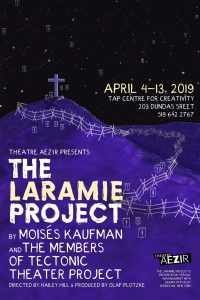 Called a “fusion between realism and the absurd,” A Permanent Image is a tense exploration of the distance families put between themselves, and what it takes to bring them back together. 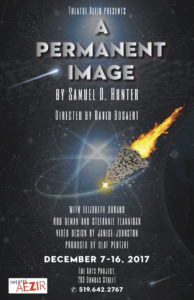