Six fiendish criminals from London’s past converge on Fanshawe Pioneer Village to tell their tales of infamy and then—they ESCAPE! You will become part of a Sheriff’s posse who are willing to take the law into their own hands in this thrilling participatory theatre experience.

I is Another is the story of 19th century visionary French poet Arthur Rimbaud who abandoned poetry at age 19 to become a gunrunner and slaver in Africa. Two years in the making, this play marks Jason Rip’s most sweeping and ambitious project yet.

Colonel Thomas Talbot may be the most powerful man in his 35,000 acre “principality” along the shore of Lake Erie in early 19th century Upper Canada, but he is not known as a kind man. Discover for yourself if a parade of tranquillity-shattering phantoms can change his ultimate fate.

Tickets: $50 each, maximum of 50 tickets per performance.

Based on A Christmas Carol, by Charles Dickens

Spirits of Eldon is the sequel to last year’s successful Spirits of Petersville, which was presented at the Grosvenor Lodge. This year, another historical site, the famous London landmark Eldon House, has opened its doors and invited in a mass haunting!

There are some key differences this year, including a fiesta of frights provided by eight local writers and performed by eight local performers. Writers were asked to tie their stories into Eldon House to help honour the historic home’s 175th Anniversary. Patrons of Spirits of Eldon will bear witness to the following original tales of terror:

Safety coffins that don’t work? Something special in the pot? A voodoo priest and his friends? The secret behind an old Native blanket? Tea time with a ghost? Ghosts in the air we breathe? Spirits of Eldon is a delightfully macabre compilation of all kinds of terror!

What a perfect way to celebrate the Halloween season – by celebrating local history and local writers!

For information on this diverse evening of shivers and chills, please contact co-producer Jason Rip at 519-932-0417.

Our York Detectives are back to try to save the backwoods settlement of Fanshawe from a murdering monster! Is the Beast from the Bog animal or human? Discover for yourself in this hilarious whodunit!

Grimes of the Borough: A Society Play

Who are the victims of society? Are we all victims in some way? In this hauntingly powerful drama — based on the 18th century poems by George Crabbe, we see the constant struggle one man faces when he chooses to live outside of the limits of society. “Important ideas relevant to our time”.

Based on the poems by George Crabbe

After last year’s spectacularly scary jaunt at London’s historic Grosvenor Lodge, Frights of Spring has moved to an even more haunted location — The ARTS Project! Eight people were crushed to death in the Reid’s Crystal Hall Disaster right next door resulting in some seriously dark spiritual energy.

The only part of TAP not in play in this year’s macabre quartet of stories will, ironically enough, be the theatre. Look for new twenty-minute offerings from:

Last year’s successful event is still being talked about in whispers as a unique experiment in environmental theatre.

Don’t miss Frights of Spring II — and bring someone to cling to.

Tickets are $15 and are available at The ARTS Project.

Returnity: Episode One — The Softness in Papa will be revived for one last performance. This first episode revolves around the attempts of the staff of the Return Again Better Prepared clinic to minister to the troubled soul of Ernest Hemingway.

Please join us for the revival of this series. Admission is only $10 for a full hour of dark, metaphysical comedy. Tickets are available only at the door.

Part of The Big Comedy Go-To

Premiere of a new play series written by Jason Rip. Contact the venue for more details.

Home From the Forest / Water-Play

Home From the Forest

Book launch for Jason Rip’s five-play anthology Middlesex and Violence. Readings from the five anthologized plays will be performed, and the book will be for sale.

The Cricket on the Hearth

Spend an evening in Victorian London! Enjoy a traditional 19th century Christmas dinner served country style followed by an outstanding performance of The Cricket on the Hearth, based on the short story by Charles Dickens.

Tickets $50.00 each, maximum of 50 tickets per performance.
Advance tickets required. Phone 519-457-1296.
All proceeds support the BIG on HISTORY! Capital Campaign.

A Play About Paul Peel

On November 7, 2008, Paul Peel would have been 148 years old. The remarkable story of this local artist, whose works make up a significant part of the historical art in the Museum’s permanent collection, is told through a collection of monologues between Paul and his sister Mildred, also an accomplished artist. Accompanied by a visual representation of Peel’s art work, this play is a multi-media production that will both entertain and enlighten.

Dr. Hadley Williams and Mrs. Elsie Perrin Williams request the pleasure of your company to enjoy a sumptuous dinner in their Great Hall followed by a presentation of The Coalshuttle Incident, a new, historically-based murder mystery by Jason Rip and the cast of Theatre Nemesis.

A Samhain Celebration of the Art of Scary Story-Telling

A Woman Scorned: The Tragic Tale of Phoebe Campbell

Our haunted hay wagon takes you back in time to the true story of Phoebe Campbell, who murdered her husband in 19th century Middlesex County.

NOTE: Any remaining tickets will be available, on a first come, first serve, cash basis, at the gate. The gate opens at 6:00 p.m. on the night of the performance. This event goes ahead rain or shine. Please dress for the weather.

A portion of ticket revenues will be donated to the Chris Doty Endowment Fund.

Calomine Burymore gets a pretty little cousin-killing dolly for Christmas and learns the unfortunate lesson that we must all, in various ways, murder the things we love. The return of London’s macabre cult favourite, this time with four generations of Burymores!

Hollywood horror films and amusement park rides have shown us that people can enjoy being frightened. Being taken out of a normal “safe space” can be an exhilarating experience. The latest project of Theatre Nemesis involves a simulated hostage crisis. The audience is not expected to participate and will not be directly threatened or menaced but, like it or not, they will be characters in an intense drama that will unfold without the comforting presence of the Fourth Wall.

Have Mr. Monday and his homicidal cohorts, The Iscariot Effect, convinced themselves that they are part of a coordinated global overthrow of the One World Government? Or are they merely seeking the quickest and bloodiest road out of anonymity? In either case, they have taken the entire Symposium on the Future of Nursing hostage and have released a series of demands that alternate between vague and nonsensical. Mr. Monday, the charismatic charmer; Sweet Marie, a “most beautiful variety of scorpion;” Obit, the human bomb; and Kubrick, the man who’s getting it all on film. This is The Iscariot Effect on their first and perhaps last night of notoriety.

A piercing indictment of modern media’s hyper-fixation on the violent and visceral, Hell Bound will enclose its audience in a spellbinding simulation of something we frequently reassure ourselves “could never happen in Canada.” 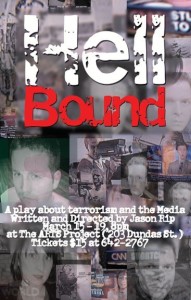 A crumbling relationship, a surrogate son, and a trip to African Lion Safari at summer’s end. What’s to be done when a child doesn’t come home? Where will we store all those tears?

The Ice Cream Man Has Died

George South has been peddling ice cream from a van for his entire adult life. He loves his job and looks forward to those few months a year that are filled with children’s smiles and dribbling chins. But this may be George’s last year. It seems winter has come to stay.

It has always seemed a cruel injustice to me that the name Fatty Arbuckle, if people remember him at all, is forever and unjustly associated with a Coke bottle (an item manufactured out of thin air through William Randolph Hearst’s campaign of character assassination) supposedly used to rape and murder the helpless (and, it turns out, not-so-innocent) young starlet Virginia Rappe.

This man’s profound contributions to vaudeville and early cinema have been largely forgotten. To provide a short list: he discovered Buster Keaton and Bob Hope, many of his best gags were ripped off by Charlie Chaplin, he was the first star to earn a million dollars and have complete artistic control over his pictures, he pioneered many new developments in cinematography, etc.

After 3 gruelling trials, he was acquitted by a jury, but his public never forgave him for what they thought he did. He spent his last decade as a drunken, lonely pariah forever waiting for his second chance.

A vindication of Roscoe Arbuckle (his friends never called him “Fatty”) is long overdue. Roscoe’s Ghost is a tribute to a great man whose big heart was broken by scandal, intrigue, and out and out blackmail.

Miss Wisconsin describes the personal journey of Tabitha Simms (born Christopher) as she strives to save up the staggering sum of $75,000 required to pay for sexual realignment surgery. Tabitha calls herself a “songbird”, and will perform many pop standards as part of her “One Woman Cabaret.” Her life story is told in a series of comedic and dramatic monologues inspired in part by the actual life experiences of trans-gendered Londoners. Two hours make-up is required to transform the 6 foot 6, 300 lb. performer into this sweet and sultry lady. We will say that size 13 pumps are very difficult to locate!

After being rejected for a plum dramatic role, Nestor Burymore succumbs to depression and takes a melancholy jaunt into la-la land, where she meets the denizens of Grimm’s fairy tales and royally bums them out. Will Nestor find love in middle age? Will Enoch overcome his escalating control issues? Will Hammish get mugged by an angel? Will the Witness Reincarnation Program parole Strom from his life as an armadillo? Will Calomine break out in an impromptu lithium-inspired show tune? Will Ignacia sigh and roll her eyes skyward like in the old silent films? What the hell is Jeff Werkmeister doing in this play? Come see the third installment of London’s gloomiest comedy: Curse of the Burymores.

A Curse Of The Burymores Christmas Carol

Strom Burymore, dead and drunk, plunges into a sub-conscious night journey encapsulating every act of festive infamy he has ever experienced and / or participated in. His siblings Enoch, Hammish, Nestor, and Calomine and his great granddaughter Ignacia play a variety of phantasmagoric wraiths as Strom’s body gradually labours its way towards detoxification.

Tickets: $6 at the door, $5 if you arrive in festive or flamboyant costuming

The Curse of the Burymores

Epic adventures featuring various super heroes and villains are contrasted with the “timely interventions” of teachers, child psychiatrists, and the harsh, sharp light of the adult world.

The Washing Away Of Wrongs

The year is 1956. Eugene Reed, acclaimed forensics detective, is nearing the end of a storied career. Before he retires, he must investigate a series of suspicious drownings in the small religious community of Lambsfield. Accompanied by criminologist Ildiko Quip, Reed must peel back the lid of a sordid world of secrets.

BEARD: A few moments in the life of Roy McDonald 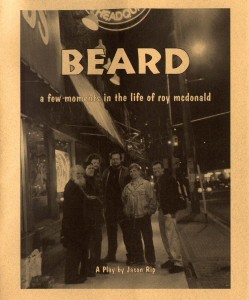